Let’s face it, riding a Lambretta can be a dangerous thing to do. Most are not modern scooters designed with safety at the forefront. Lambrettas were designed in the late 1940’s as a way to get post war Italians on the road as easily and cheaply as possible. They look really cool but they could definitely be safer. As with any two wheeled form of transport, your biggest danger is people in cars not seeing you. So, how do you keep yourself as safe as possible on a Lambretta?

Yeah, that vintage helmet you picked up at a car boot sale might have that look that you had been searching for but it is almost certainly unsafe. A badly designed helmet can actually make head injuries worse. Nearly half of the people killed on scooters or motorbikes in 2006 died because they were not wearing a helmet. Wearing the wrong helmet can be almost as bad. If you hit something head-on with your Lambretta, the chances are that you are going to go head first over the handlebars or headbutt whatever you crashed into.

A modern helmet that meets British safety standards will be made with a hard outer that is designed to crack and dissipate the force of the impact and a clever retention system to keep your brain inside your head. You can get helmets that look old but have all the modern safety features, so ditch your vintage one and invest.

Tip 2 – Do You Really Need all those Wing Mirrors?

Lots of wing mirrors look great, but do you want one coming off and being crushed into you if you crash? You might not have thought about it before, but they are a serious hazard to health. You could needlessly injure whoever you crashed into. Small, spikey bits of metal are not conducive to health.

If you are driving with only the headlights that came on your Lambretta, you will probably be familiar with squinting at the road. You are putting yourself in serious danger unless you get yourself a safety light, and even then it is not great. Being unable to see what is coming is dangerous but even more dangerous is other people not being able to see you. The visibility of Lambrettas is not amazing and their tail lights are tiny or non existent, so even drivers who are looking for you might not see you in the darkness.

If you really need to ride at night, put a safety light on, get a big reflective coat and helmet, and wear them.

Your Lambretta might already have cost you a lot of money but they require constant care if they are to be as safe as you can make them. They are vintage machines, made in a different era of quality standards, so stuff breaks and falls off with expensive regularity. Using high quality replacement parts and getting a qualified Lambretta repairperson to do regular check-ups on your Lammy will hopefully stop some of those bits falling off.

The tyres need to be regularly pumped up, the oil changed every few rides, and all the joints kept well lubricated. Spots of rust quickly spread, so you need to keep an eye out for them. Rust can erode the chassis of a Lambretta in no time at all, so having a look for rust and corrosion every few weeks can keep you safe and your Lambretta alive.

The engines use dirty fuel so they need regular overhauling to stop them from crapping out in heavy traffic. Brake lines and pads need regular replacement if you use it a lot. Because of the primitive technology Lambrettas were made with, you will be fighting an endless battle to keep your baby on the road. It is worth it, of course, but spending money on safety is the best money you could ever spend.

Your Lambretta heroes might have cruised around in a T-shirt and shorts but what you didn’t see was the skin grafts that some of them required when they fell off the thing. Knee pads and elbow pads will save you skin, muscle and bone if you do come off (and let’s face it, you will at some point). This does not mean you have to look like the Michelin Man, you can get tasteful and stylish clothes that are also safe.

A good pair of goggles will keep your eyes safe and add to the retro look. They are practical and cool, what more could you want?

If you ride your Lambretta responsibly, follow the highway code and still come a cropper because of a careless driver and you get injured, get legal advice! Insurers like to offer quick settlements for road traffic accident claims but you shouldn’t just accept any first offer of compensation.

Getting legal advice from a solicitor can make a world of difference when it comes to compensation, and the best part is you will find most give their advice for free (in the hope of you claiming through them). 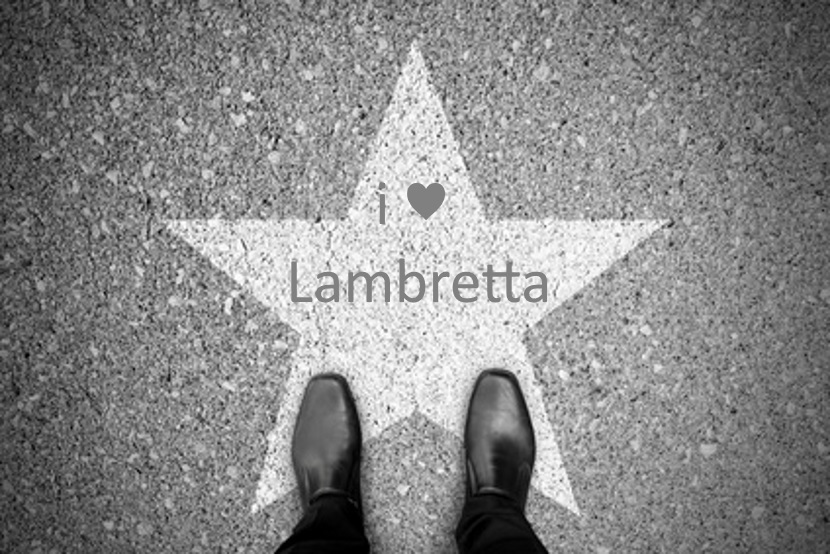 The Lambretta scooter is synonymous with the timeless style of the Mods of the late 50’s and 60’s for us Brits but people all over the world have identified with its clean, classic lines and instant cool. We all think we look great on a Lambretta, but here is a list of some famous people with a Lambretta making them look even better.

A clear example of how good looks and classic styling come together to create an almost unbearably attractive combination. Cameron Diaz was one of the coolest women on the planet for a long time, starring in huge movies, having a good sense of humour about things, and adding a shimmer of that star quality to anything she did. Ok, some of the movies she was in were terrible, but when Cameron Diaz was riding a Lambretta, she looked like she belonged there. If we could only look so darn distinguished ourselves.

The famous crooner is one of the biggest selling acts of all time. Dozens of top 10 hits, world wide tours, and enduring popularity with generation after generation. And do you know what he spent his first hit single royalty cheque on? A Lambretta TV175. A man of good taste, you might say. There are a few photos of Cliff Richard and his Lambretta looking very happy with some friends, cruising around in 60’s London. He probably still has it, once you have one, you don’t often look back.

He might not be familiar to younger readers but Rock Hudson was once the epitome of American Cool. Pictured with glamorous Italian girlfriend Gina Lollobrigida in the 1961 “casual sex farce” Come September, Rock (what a name!) looked ravishing as he toured about on his favourite Lammie. That film came at a crucial time for the popularity of Lambrettas. It put them in every cinema in Europe and America and was the first to be shown on long-haul flights. The film itself has not aged well, with some outdated sexual politics and soppy romanticism, but one thing has not changed: Hudson and Lollobrigida look amazing on that Lambretta.

The film also has the immortal line “I don’t have to make sense! I’m Italian!”. For lovers of Lammies, it’s a must.

What else would the Mod Father ride but a Lambretta? Perhaps the man most responsible for the revival of the Mod look, Paul Weller and The Jam took that look and boosted it back into the modern consciousness in the 1980’s, where it has remained ever since.

With his Union Jack guitars, mop head haircut, and “too cool for school” look, Paul Weller has stuck to his Mods roots and churned out some surprisingly popular British rock and britpop records. He is frequently seen cruising around on his Lambretta and it must be said, he makes it look good.

Britpop was an explosion of British cool around the world in the 1990’s. Suddenly the “London Look” was back in and everyone was clamouring for everything Union Jack and 60’s cool. The Italian Lambretta was included in this and two of the finest songwriters and performers from that generation, Damon Albarn and Graham Coxon were snapped hanging louchely over the handlebars of their Lambretta.

There could not be a more British or Britpoppy image than this. It harks back to the first explosion of British music around the world and brought it into modern perspective, refreshing and redefining a classic for a new generation who grew up dressing and behaving like their heroes. Blur were huge, though not as huge as Oasis, another band who sought to use their British image on their road to stardom.

In an interview with the Radio 6 Music, Liam Gallagher revealed the first thing he bought with his first royalties cheque: a 1954 Lambretta, which he says he still owns. He also told Matt Everitt that it appears on the cover of Definitely Maybe, Oasis’s biggest album. It is not, they band are pictured in a front room, sans Lambretta. It does turn up in the sleeve notes however. Even better is the picture from 1994 of Liam looking very young and a bit insecure, sat on his shiny blue Lambretta.

Say what you like about the man himself, he did a lot for the enduring popularity of Lambrettas.

The kid in Quadrophenia is perhaps the most famous Lambretta riders. Played by Phil Daniels, Jimmy gets away from his humdrum life in a mailroom by riding his Lammy, taking amphetamines, dancing, and fighting with Rockers. When it came out in 1973, it was regarded as some as a masterpiece, by others a pretentious, overblown rock opera. Nobody would deny the enduring image of Jimmy on his many-wingmirrored, totally modded Lambretta. Looking sharp in his pinstripe suit and parka, the image of Jimmy cemented the appeal of the Mods and immortalised a time, place, and attitude. Imitation is the sincerest form of flattery, and millions have imitated that timeless slice of Lambretta style (most did not drive off cliffs though).