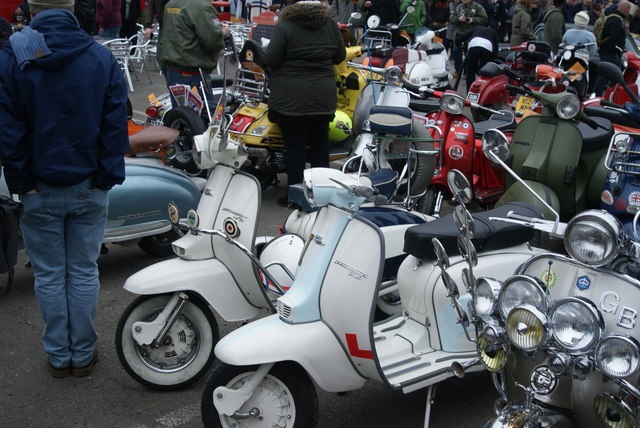 Lambretta never stopped being cool, man! Alternatively, they were never cool, man! Scooters divide opinion like few other things. Some love the Mod look and the more wing mirrors, the better. Others associate scooters with undesirable elements and an “unattractive” attitude. The whine of a 150CC engine struggling up a hill can evoke fond memories or feelings of irrational hatred.

Both are valid concerns, but really, who cares?

The Birth of Cool

The word cool came from black Americans who played jazz (whose etymology we shall not discuss), or so the story goes. The early Mods in the late 50’s were “hip” to the American jazz and got their name because they were into the rising tide of modern English Jazz that was bursting over London at that time. They started using the word cool, alongside the Beats, and it quickly caught on.

What a Mod meant soon evolved but it took with it a strong aesthetic sensibility and a penchant for scooters, Lambrettas especially. Lambrettas were cool, obviously.

The Infancy of Cool

Cool as a word got picked up quickly with the media reporting on the birth of counterculture and all these teenagers doing naughty things like having sex, taking drugs, and growing their hair long. Cool became a shibboleth, a word used to differentiate friend from enemy. Lambrettas were cool (unless you were a Rocker), parents were not.

By the early 60’s, Mods had made it to the front pages with their highly publicised fights with Rockers, who rode motorcycles and listened to rock ‘n’ roll music. They were often pictured on their scooters. These were the only way for a Mod to travel in style. Why scooters? Because a good Mod could keep his suit clean and tidy behind the front screen, not possible on a motorcycle. That, and the Italian design was clearly a classic, with clean lines, great colours, and the potential for many, many wing mirrors.

The Death of Mod

By the late 60’s, the counterculture had taken a turn for the psychedelic and many Mods had hung up their pinstripes, grown their hair and become hippies. Others had grown up, got jobs, had kids and done the “life” thing. Some did not forget and stuck to their guns, but the momentum had gone and everyone was on a different trip. Lambretta was in trouble as well; by the early 70’s it was gone.

Cool meant different things, and it doesn’t look like many people thought of Lambrettas at all. Everyone was familiar with their stylings and associations with bands like The Who and the Small Faces, but they had transformed too. Cool Britannia was being replaced by miner’s strikes and power cuts.

A generation of kids who had been too young to be Mods the first time round but had seen them and loved them suddenly found themselves in the perfect spot for a bit of style revival. In the late 70’s and early 80’s, there was a lot of dredging around for other ways of making yourself distinct. Punk happened, but the kids who wanted to look good (and wash regularly) would never have joined. Nobody wanted to be a hippie anymore. The appeal of big sounding guitars, ska, soul, and R&B is timeless, however. Bands like The Jam came along and said “hey, Britain used to be cool, let’s do that again”. And they did.

Paul Weller thrashing his Union Jack guitar and blazing around on a scooter brought a lot of attention back to the Mod style. Now it was viewed with the nostalgia of people who hadn’t been there at the time, Mods looked cool again. Forget the fights, the vanity, amphetamines, and jazz, Mod was a way of reclaiming a lost identity. For that, you would need a Lambretta (or Vespa, but don’t say that too loudly).

Liam Gallagher was pictured on a Lammy in 1994. He spent his first royalties check on it, apparently. Whether that instantly makes the Lambretta uncool is up to you, but a new generation of kids saw him and loved him along with his Lammy. The guys from Blur were Lambretta fans too, being similarly pictured. The 90’s was a long wave of nostalgia for the good ol’ days of the 60’s (again, from people who weren’t there), so once again the Mod look was dug up, given a good dusting off and put on display.

For a while, the Lambretta was the thing to have. It meant you were cool. Never mind the practical realities (most kids had been brought up on much higher quality Japanese motorbikes and cars), if you were buzzing around London in the mid 90’s on a Lambretta, you were saying something.

Lambrettas in the New Millennium

Things come and go. With modern plural tastes, the factionalism and identification with certain musical styles has died. Unfortunately, original Lammy’s are very expensive nowadays, so they are almost the sole preserve of middle aged men (and occasionally women). Nobody wants to drive what their parents drive, so the Lammy is out. It’ll be back though.